The End Is Near

It seems likely that tomorrow will be our last opportunity to contact the Vermont Lunar Cubesat.  As I write this we are an hour away from our 2 year anniversary in space.  When we were planning the launch, NASA said we'd have about 2 years in orbit...I guess they weren't kidding!  As of this afternoon I am still gathering onboard data in a careful priority order for archiving and further analysis.  I am very happy that I feel we have most of the important data and during the pass we hope to have tomorrow we still will be collecting relevant and fresh data such as on-board temperature.  Sorry, when I figured out our time was limited I put the priority on getting passes and I have pictures to post (from the 9/26 roll) after that task ends for me.  As you can imagine, the knowledge that our mission was coming to an end changed the priority for me.

I will post updates as we see how this ends.  Thank you all who have sent messages of support and encouragement.  I am looking forward to beginning the work of data analysis when it isn't competing with data gathering.
Posted by Chief Tard at 4:18 PM No comments:

The satellite has indicated it has another 30 pictures taken since yesterday.  Now to begin the process of analyzing sizes to see which ones might be interesting.  I scripted commands to read out the sizes of some of the files and got some responses but they are stuck in the buffer of my serial port reading software.  I was able to interpret the filecount command responses using an ascii chart which indicated that there are 60 (HEX) files stored.  The bird records 3 files for each snap. a picture, a GPS reading, and an IMU observation.  So that means there are 30 (decimal) pictures awaiting download.  Now I need enough downloaded data to flush the serial buffer which appears to randomly hang up and contains the size of several pictures, which I use to prioritize downloads of.  Many files are black or "flares" (pictures of the sun) and I want the pictures that contain the most detail.  So the biggest files, which have the most pieces to successfully download, are the ones of interest.  I want to try to take you through the process as I attempt to gather this roll so you can appreciate the amount of effort it takes to even get one of the pictures you see on this blog, which might be as simple as a picture of clouds and ocean.  Need to set up tomorrow's script to get some sizeable downloaded data so the buffer flushes and I can get the transcript of tonight's file size inquiries.  Then I can start decoding file sizes and figuring which pictures to start gathering.  Let's see how it goes.

To get this to happen, one program on one computer steers the antennas to match the pass track so we're pointing the antennas at the bird as it goes by.  This computer needs precise clock and latest NORAD data to be right.   Another program is used on this computer (with current NORAD data and the accurate clock) to tune the downlink (receive) radio to keep the frequency accurate as the satellite passes.  The 9600 baud packet radio protocol in use requires an error of less than 5 KHz, ideally less than 2.5 KHz to decode reliably with weak signal, which fades and returns as the satellite spins during the preciously short pass.   Another PC decodes the received audio (if recovered error free) and forwards it to a serial program that filters packets to only be from our satellite (another satellite running 9600 packet shares our frequency and has a very close orbit).  It stores the result in a log that I can then use the HEX of to convert to ASCII and DECIMAL to make sense of the data.  This is all fun and everything, but doing it in realtime so I can make mission communication and command decisions during a pass is an "all faculty" consuming task.  Unfortunately, I really have no one else who understands any of this, so I am on my own to make the best of this situation.

But all of this is an awesome problem to have.  The miracle of recovering this mission data and pictures, to have empirical proof that the Earth is actually round (not that I had doubt), the understanding I now have of planetary and orbital mechanics, and the number of people I have been able to influence and increase their interest in space over cocktail discussions.  Priceless!  By the way if you are feeling a little awkward at a social gathering, try starting a conversation with "Did you hear about the satellite I helped build?  Did you see the pictures it took?"  You will distance yourself farther from them, but the looks on their faces as they try to process the concept is priceless!

I'll keep you posted as we progress.
Posted by Chief Tard at 10:41 PM No comments:

After a bit of work I decided to shoot another "roll" of pictures on August 25.  A software tool made by the Cubesat team (especially Peter Chapin) is extremely useful because I can craft scripts to automatically communicate with the VT Lunar Cubesat.  This is real handy when I just can't be doing it in real time, such as middle of the night passes.  It is limited because it doesn't react to grouchybird up there who sometimes likes to ignore commands or take a while to respond.  It works pretty well and I am getting better at it.  I can now leave my rotor tracking the orbit, and I have a separate radio for receiving so now Doppler correction is automatic on the downlink.  Finally getting good at this?  I am noticing frequent resets, and now I have to make sure there is sun on the bird before I try to download big files, so the batteries are likely going.  Orbit is at times in the ~340Km altitude range, so I don't think we have a lot of time left.  I'll do my best to keep it running until the end.  Here's the pictures I got: 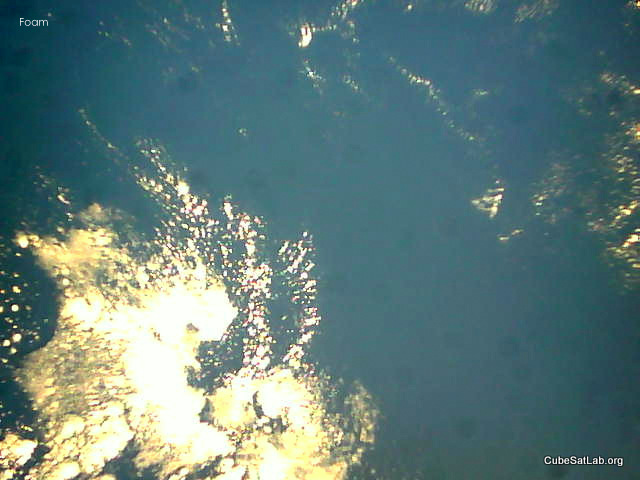 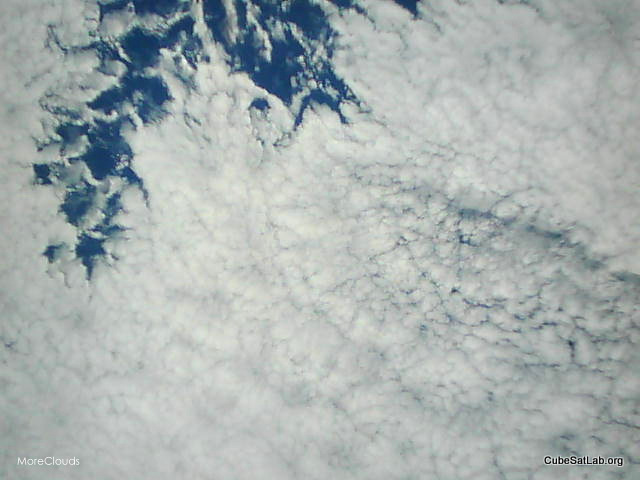 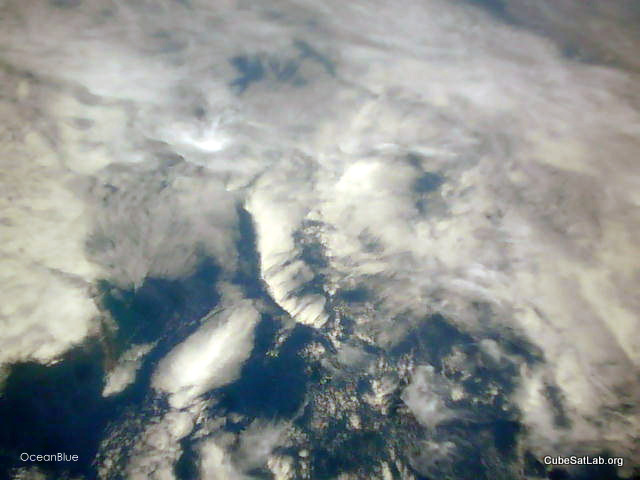 Posted by Chief Tard at 2:31 PM No comments:

At approximately 12:37PM EDT today (Monday), we will enter our 10,000 orbit.
This will mark 1 year, 9 months and 25 days since launch.
We were able to have communication Sunday night and are still operational.
Congratulations to Vermont Cubesat Team!
Posted by Chief Tard at 9:28 PM No comments:

I have retrieved and processed the best pictures from the "June 15" roll.  I've had to remember the procedures and work arounds we developed to get everything to work.  Luckily I documented it step-by-step and while I remember thinking "of course I don't need to write this down, I won't forget".  Well, let me tell you, I would have forgot.  I am really lucky that I didn't change the toolchain computer and my workflow was well documented.

One of the pictures seems to be a coastline, but the clouds make it difficult to identify.  I think it is (based on time when shot) near India or Australia. 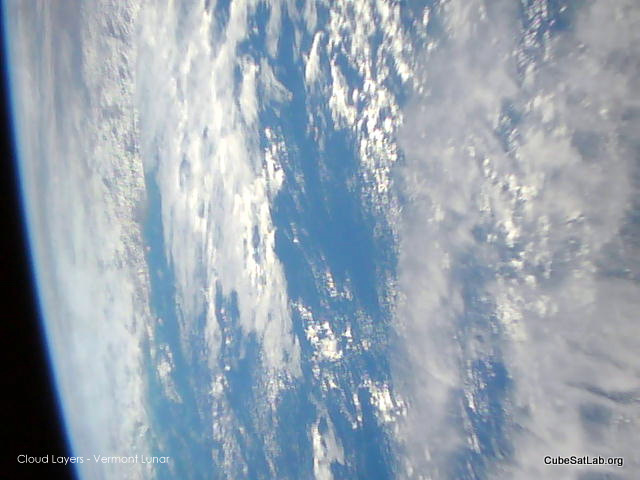 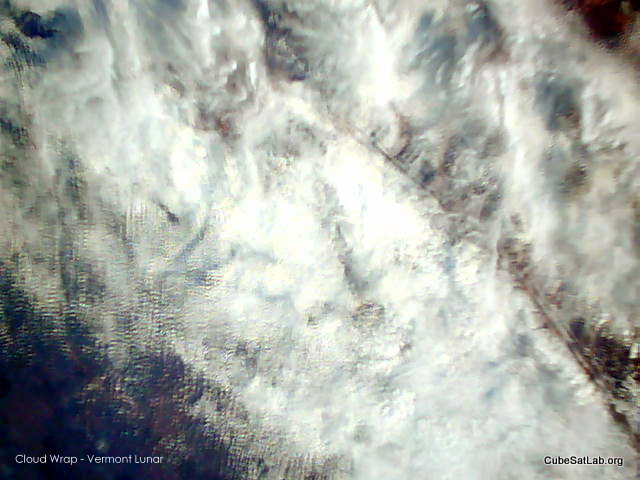 The satellite is still as finicky as ever, I think it laughs at me when I issue several commands, pretending it didn't hear me, when I know the link budget and there is plenty of clear signal up there.  It has had a personality since day 1, so I know it knows what it is doing.
Posted by Chief Tard at 10:33 PM No comments: